In the footsteps of Zanskaris

The land is so barren and the passes so high that only the dearest
friends or fiercest enemies would want to visit us.

The dense fog and the sudden snowfall had delayed my flight. I was on my  way to Leh for  a enchanting experience over the frozen river popularly known as Chadar trek.Flight is about to land in Leh at an altitude 11,500 ft ( Worlds Highest Air strip ) and the captain announces it is -8°C outside.As I hear a cold current  runs through me. At 10 am on a bright and sunny morning, it is -8°C in Leh, I imagine what it would be like in the dark canyons of the Zanskar river.I somehow manage to dash to a guest house with heater and spend the night.

The Chadar, which literally means sheet of ice or blanket , is essentially a walk on the Zanskar river. Every winter, the river freezes to form a gateway to Leh for the people living in remote villages of Zangla , Padum, Pishu  and Kharsha , the largest town in Zanskar. In winter, when snow closes all roads and Zanskar is impenetrable, the frozen river serves as the only gateway to the outside world for Zanskaris.
My  intention was  to start out trek from a place called Chilling, the closest road head and a tiny village and army outpost 40 kms from Leh. The drive to Chilling was spectacular. The road snakes through the wide, white frozen flats of Leh valley surrounded by snow clad mountains  and climbs to a point just above the confluence of the Zanskar and Indus rivers at  a place  called Nimmu. Frozen sculptures crafted by the sudden freezing of the tumultuous waves of water create poetry on the Chadar. The melting waters carry demurely the ice and snow, gurgling softly, as if murmuring a soulful song. Ice blocks float on  aquamarine water seem to be in a rush to meet the Indus originating from Mount kailash.  The jeep drops me a few kilometres ahead of Chilling. I have a rewarding view of valley down the river and I walk down the rocky canyon to set my first tentative foot on the Chadar.Our first camp, Tilatdo, is 2 km away. I didn’t think it would take me more than half an hour to get there. But my guess is wrong. Within a few minutes, I am sliding on an icy  sheet  only to land on my bottom. I learn some quick lessons about walking on the Chadar from my guide Rinchen  — you need to slide your feet on the sheet of ice or use soft crampons instead. We reach the camp in an hour. The evening sets in quickly and so does the cold — the temperature is -18°C  as sun sets down.The cool breeze blowing from the canyons adds  to cold. Our guide  lights the stove to keep us warm in the kitchen tent. We settle into our tents after dinner and it seems like we are sleeping in a refregierator.Down clothing,sleeping bags  and a hot-water helps me spend night peacefully. 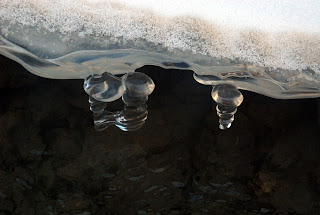 It is difficult to wrap the tent and do morning chores until sun comes up due to wind chill.At 8 am , a ray  of sunlight torches the bottom of the canyon bringing life in everyone.The rocks get a golden glow and whole valley in riot of colors.Due to copper  metal found abundatanly in rocks . A new day had begun. On the way to Shukpa our second camp, we decide to walk on the icy ledges of the Zanskar; the river is not frozen enough to form a Chadar. The walls of the Zanskar canyon twist and turn, and sometimes they spread out to make the flat white Chadar seem wider than a vast playground. At other times, they curve around a corner into a narrow gully. On a long, glassy stretch, Our guide Rinchen check the condition of ice formation using ice axe and we follow him. At one point there was a huge outcrop of rock and the solid ice path was a few feet below it. Cold water flowed nearby. I had to lie face down  and crawl under the rock for a few metres.On the third day, we wake up to light as usual , intermittent snowfall. The upper reaches of the canyon receive fresh snow showers. I get going but not for long. After walking for a kilometre, our guide tells us to stop: the Chadar has broken. The river is flowing over the frozen Chadar. Besides walking we had to clamber up the canyon walls and slither on its edges to drop down a few hundred metres ahead where it is hard . A small mistake here can be fatal and one is washed away in swift  frozen cold  water in no time.Returning to the canyon walls, team members guide each other to get firm holds on rock faces. The highly energetic zanskari  porters accompanying us dragged all our luggage on wooden sledges and would also  carry it on their backs when they would have to negotiate a raging part of the river or even jump over rods precariously driven into the ice walls. I camp at  Dibcave  in a section of the Chadar dominated by narrow ledges and overhang rock faces  and not the wide flats that we were used to.
Next day, I set out for Nerak, excited about seeing the frozen waterfalls  on the way. The day is cold and dark. Drafts of icy wind bite into our skin, our breath is frozen in a thick fog and water drips continuously from our noses. 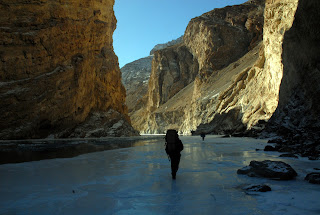 It is  dead cold  and I  walk faster to warm our bodies without stopping. Suddenly, out of a bend, the frozen waterfall leaps into view. It is gigantic and towers over us, rising almost to the height 50 -60 ft.It is difficult to use the camera with bare hands and fingers go numb.A look at the icicles in the form of stalagmites and water dripping from it  more  adds to beauty,frozen waterfalls one feels as if time is stand still. It’s difficult to imagine how falling water could freeze. For the first time on the trek, I leave the Chadar to climb to a small rest house on the trail to Nerak.The mud structures resembling head of camels and horses on the river bed draws attention of the campers. The village is hidden in the folds of the mountain much higher than us.With increasing cold, fading light the recorded temperature in the night says  -25 deg. It is the coldest night. From Nyerak, the Chadar trail gets very tough as we had to go over thin layers of  ice; sometimes dig our feet into the powdery snow or walk in ankle deep cold water.At a place called Woma we crossed precariously over narrow path with the help of ropes.Here there is a diversion to a place called Lingshed ( Known as half Chadar ). I walked over slippery stones near the river and then finally we had to climb a steep slope before we did some bouldering to reach Tsarak Do. This is the place where the newly constructed road ends. Our guide arranged a vehicle and took us to Zangla and then Padum, the capital of Zanskar. A quiet town with an idyllic landscape, this place has a population of about 900  people. During winter, most of them move to Kargil or Srinagar. The night temperature dips here as low as -32 degrees Celsius making life style miserable.Next day I visited the Monastery at Kharsha on the hillock. I  retrace the route over chadar for yet another experience and after 14 days covering  more than 100 kms .The whole journey an experience of  a lifetime comes to an end!
The Zanskaris are waiting  restlessly for the day when the Chadar  road that is now being constructed from Chilling to Padum will be operational. Though trekkers and adventurers would miss the Chadar, for the people of Zanskar, it would be a finally a blessing !
Posted by Unknown at 09:33